Accommodation: in tents (may be in hotel or guest house)

Area: Almaty region of the Kazakhstan and lake Issyk-Kul of the Kyrgyzstan

The tour “In the trail of Chokan Valikhanov” partially repeats the road walked the first Kazakh traveler and Explorer, in the direction of Kashgar in 1858-59.

Chokan Valikhanov left a rich literary heritage; it is intriguing to read his diaries, poetic descriptions taken many journeys. In 1856 via the TRANS-ili Alatau was the outstanding researcher expedition of Chokan Valikhanov “We saw the snowy tops of the Alatau mountains. Far blue these mountains were filled with high, connecting with the clouds. Sometimes the tops came out from behind the clouds. The rising sun poured on them purple-shining light. The picture is amazing!” — he admired when he first saw this fantastically beautiful mountain range.

We almost completely will pass famous in Kazakhstan route “Golden ring of Semirechye“, passing through all the national parks in Almaty region. And after going to the land of mountains – Kyrgyzstan, breaking the Santash pass, through which long ago passed the army of Genghis Khan.

18 APR 1856 Valikhanov went from Semipalatinsk to Ayaguz. The first of July the caravan crossed the Altyn-Emel ridge and headed into the valley Ili river.

We are using modern transportation of transportation – car, will arrive in Altyn-Emel on the opposite South side and also cross the same mountains. Along the way we will stop at Kapchagay reservoir, which in times of Chokan was not. It was built in 1969, the dam blocking the river Ili. Almost the entire day will be devoted to the cosmic scenery of the Altyn Emel National Park : Singing dune, lava in the mountains Katutau and Aktau chalk mountains. At last we stop for the night. 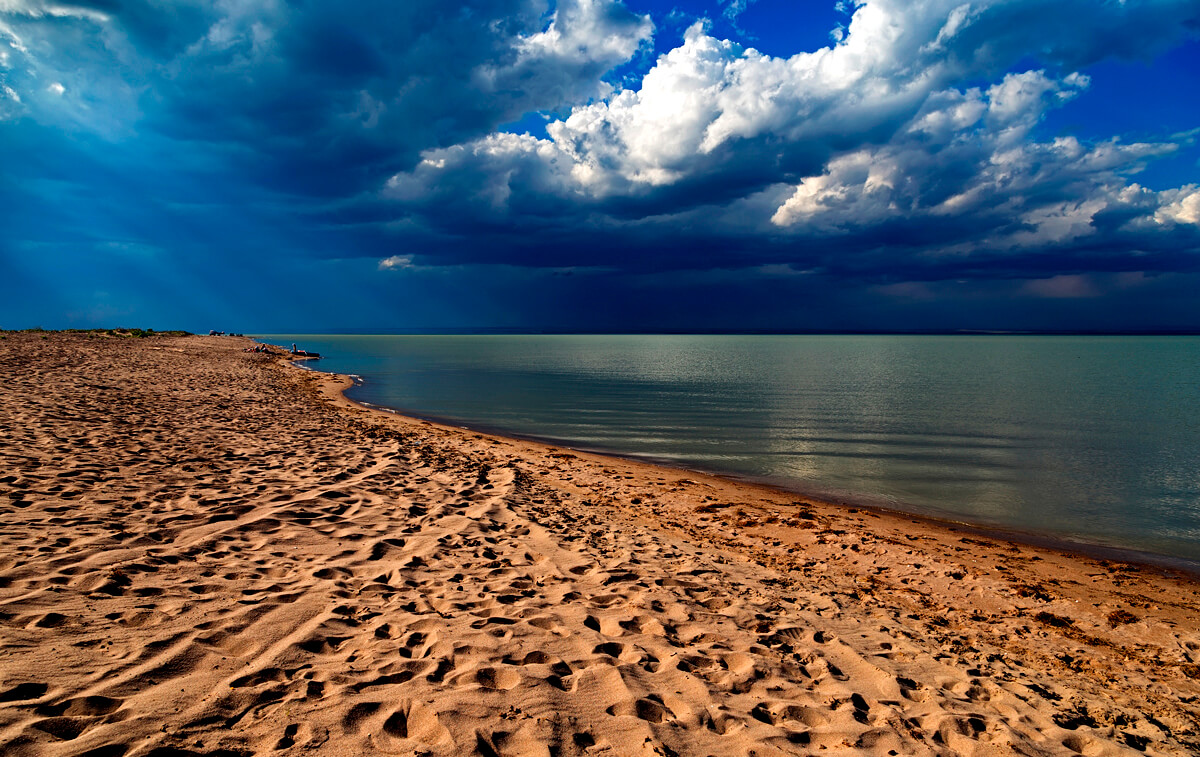 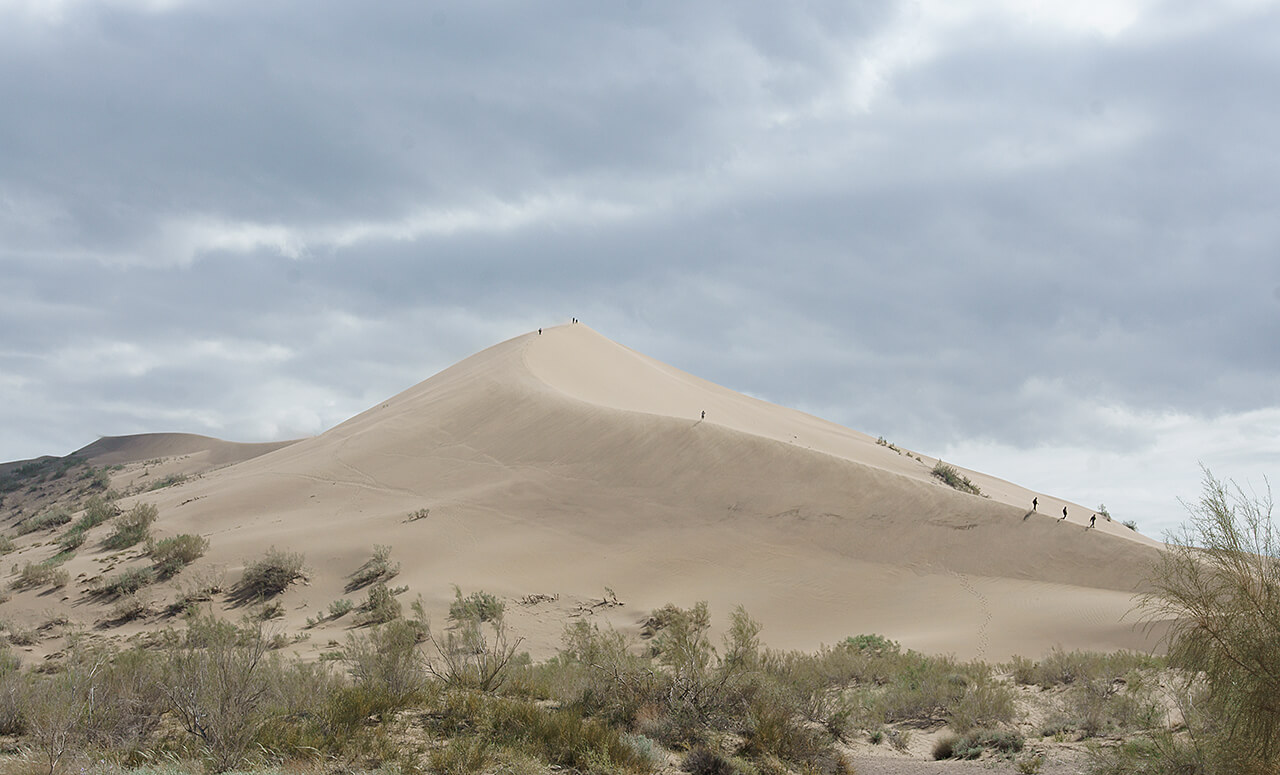 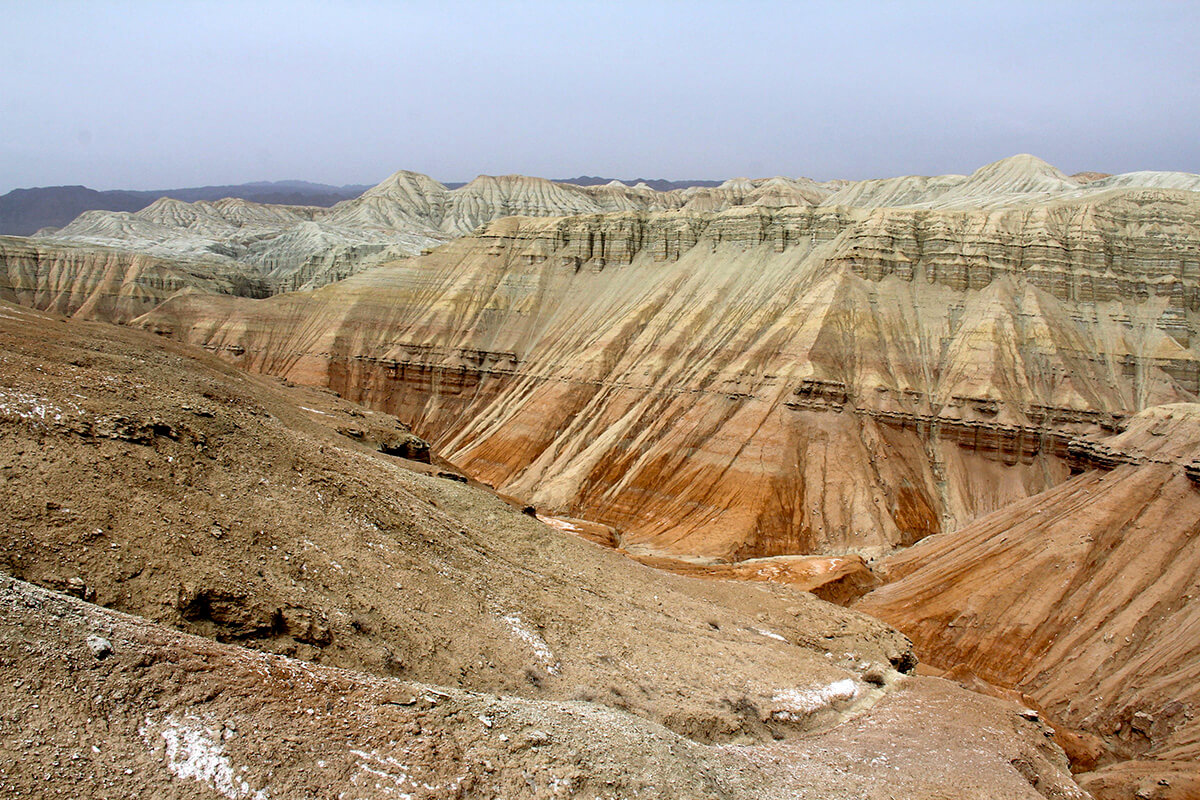 Crossing river Ili at that time was very complicated: the bridge over the river, and the crossing of the caravan was made using an old flat-bottomed boats. Further the caravan route lay through the valley of the Tekes, Carcary and Kokjar. On the way to Kyrgyz villages met Kashgar merchants traded among the local population. Establishing business contacts with them, Chokan agreed to go together to Kashgar. Then spent the nights on the river Charyn and Sogety mountains. Sogety comes from the word sugmak (to blow), there are constantly blowing winds. Along the way he proseo mountains Buguty comes from the word bugu – deer. There are a lot of deer.

First, we leave the National Park and the long drive on the highway towards the only bridge across the river Ili. Later, after turning from the highway, will drive you to the lake in the middle of a sandy desert Wooden lake . Perhaps in the days of Chokan this lake was more. Currently from the Northwest on the water surface come and the Sands of the lake decreases. They have already destroyed a grove of trees North of the lake, now there are dry stumps and trunks. Hence the name of the lake. 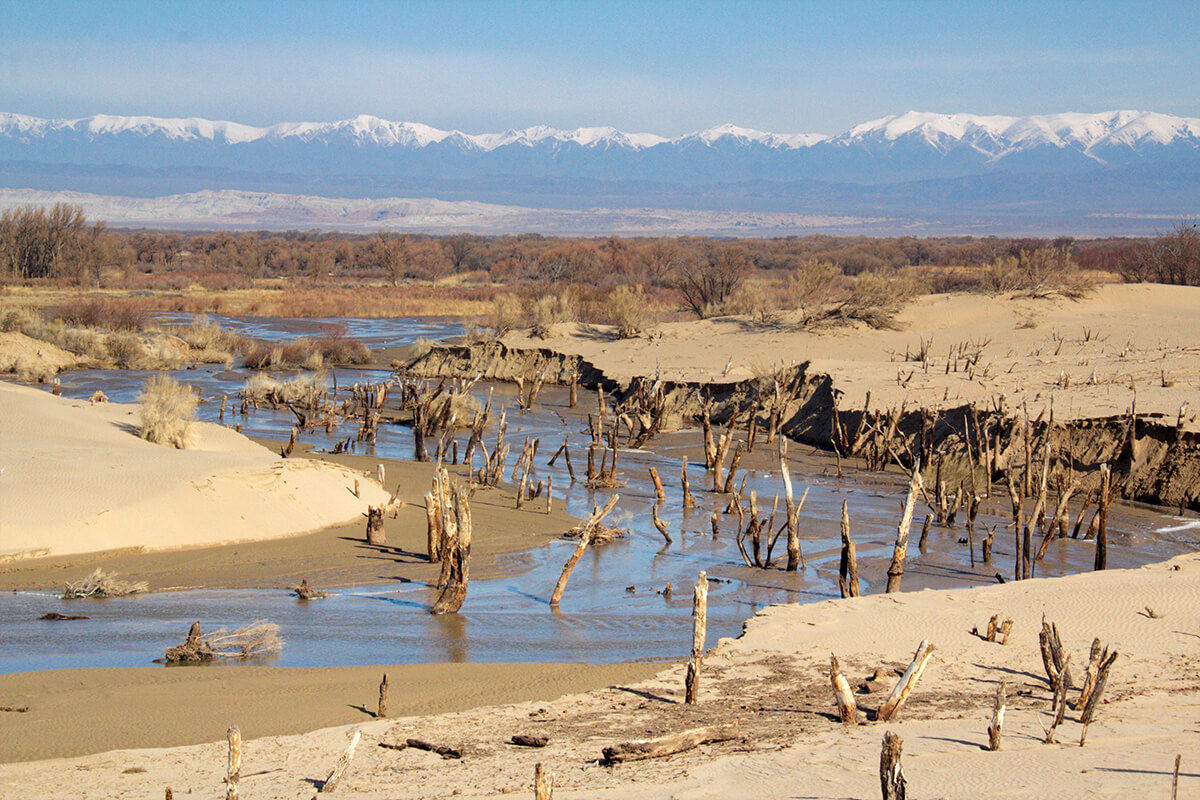 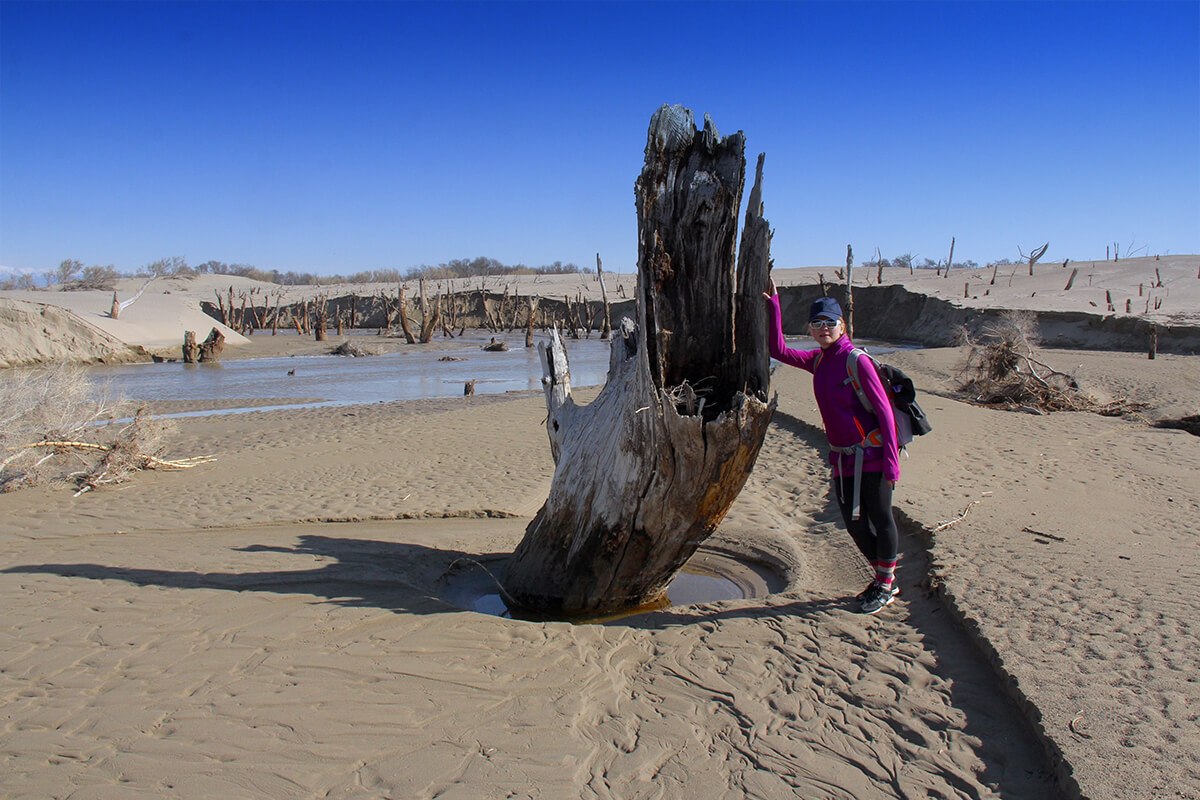 After we head to the Chilik river through the mountains with marcinski landscapes Buguty. There is a lot of reddish rocks, which were deposited when there was a sea. In the mountains there are rock carvings and abandoned mines. 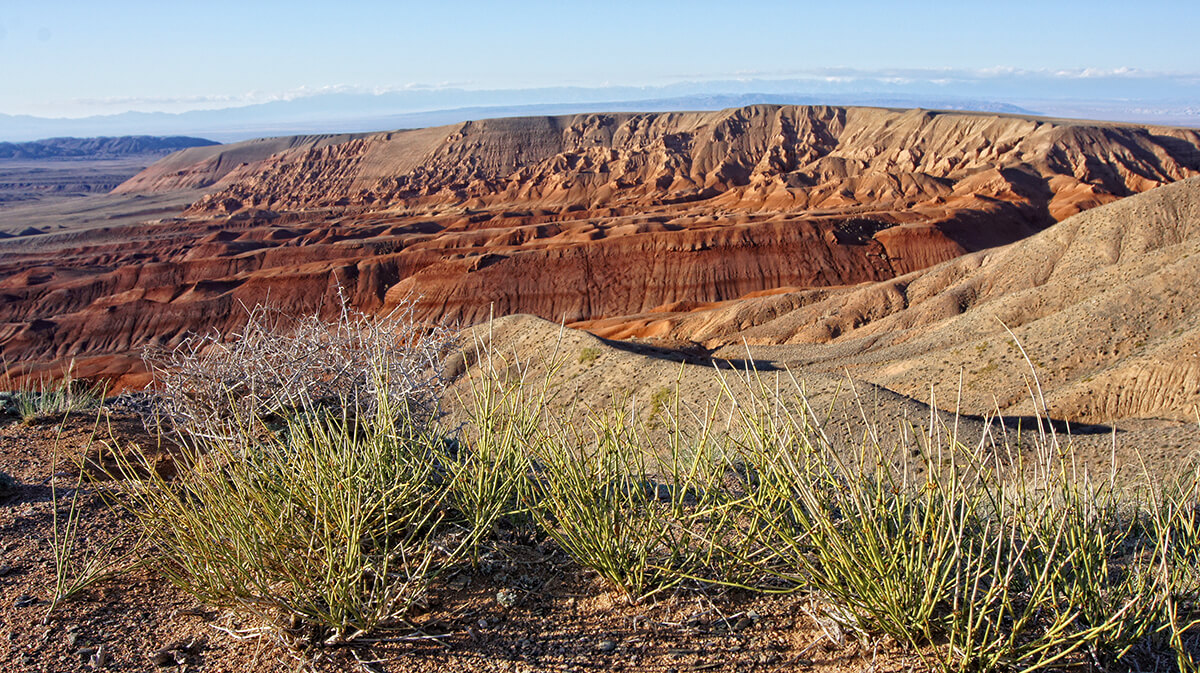 After passing the mountains Buguty go on Sogety plain and head to the Bartogay reservoir, where we will spend the second night. Built relatively recently, in 1986, as has been the tract Bartogay with ash tree grove. 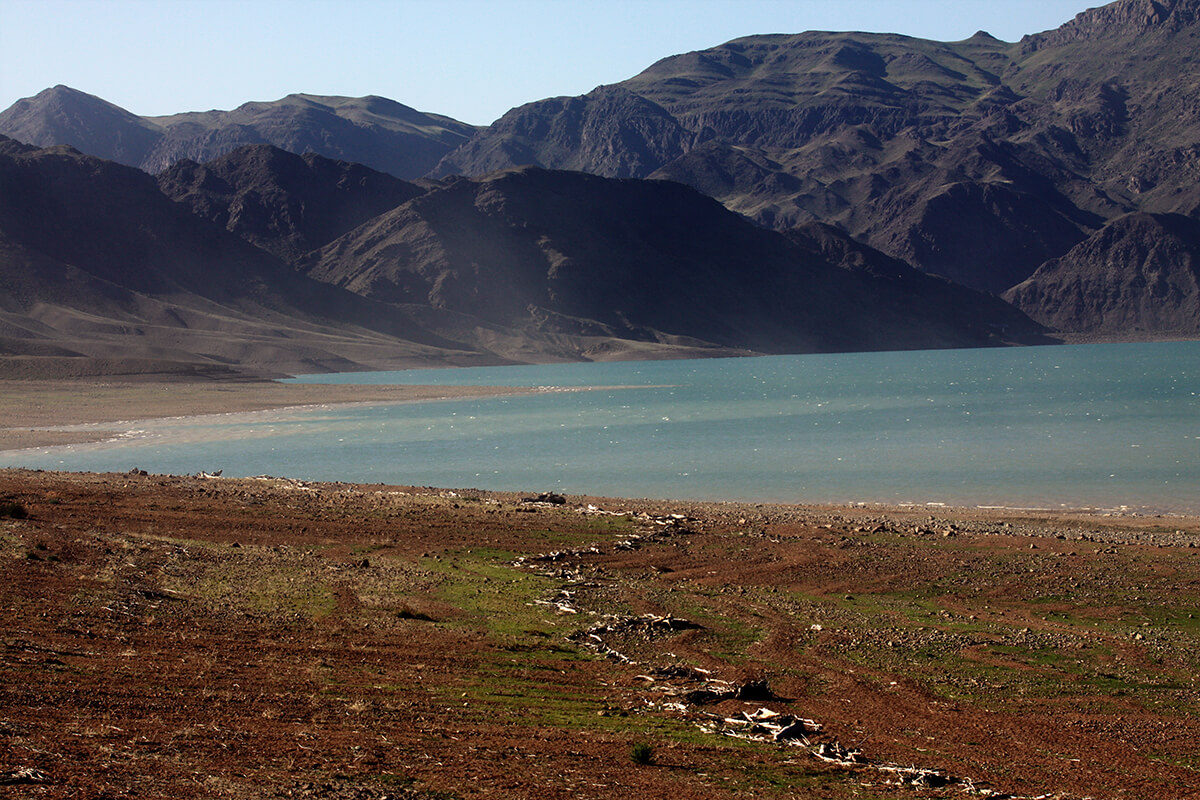 80 km from the Bartogay is a beautiful Charyn canyon, known for its Valley of Castles. Here we will walk a little longer and go deep into the canyon of the river Charyn. Get away from in the direction of Charyn Kolsay Lakes National Park through the Toraygyr mountains. 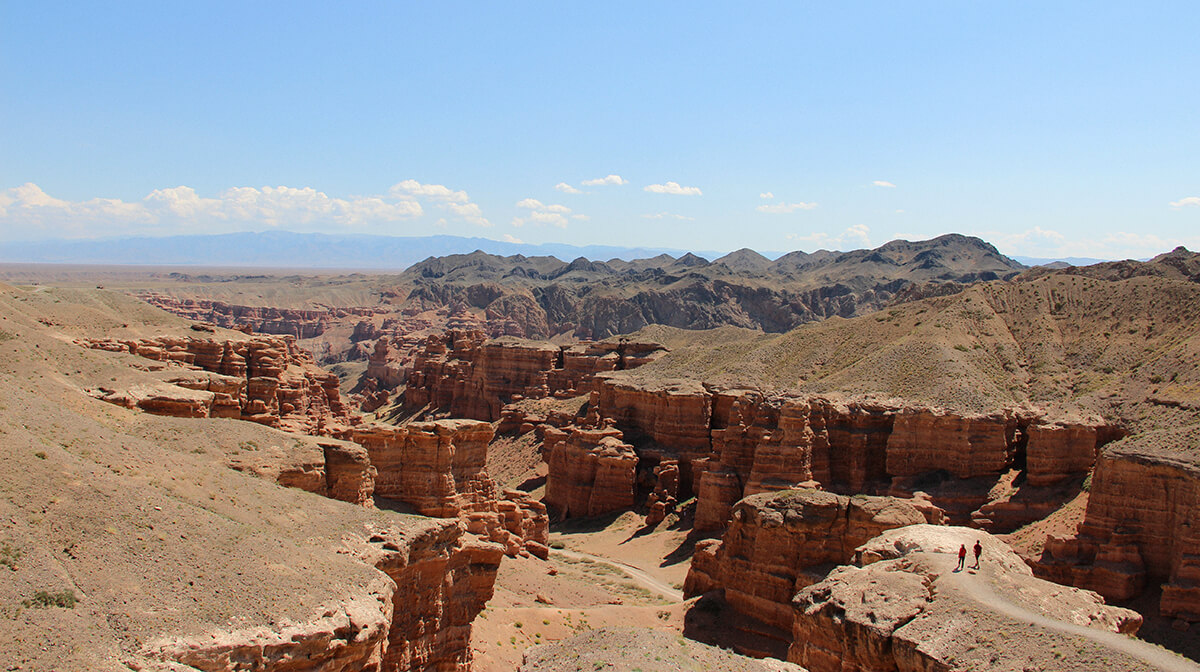 Toraigyr – chestnut stallion – the mountains, through which went Valihanov. The name comes from a legend about the expulsion of these places batyrs that brought untold sorrows to the Kazakh people. Further Chokan went directly to the border of the neighbouring state of Kyrgyzstan.

Well, we can’t help but stop by and see the beautiful mountain lake, located in the middle of a pine forest in one of the Northern spurs of the Tien Shan – the mountains of Kungey Alatau. Lakes in this National Park a few hundred, but the most accessible for tourists are the three Kolsay lakes and Kaindy lake. The latter we will spend the 3rd night. Kaindy famous sticking out of the water dry trunks of trees that had been flooded during the formation of the lake over 100 years ago. 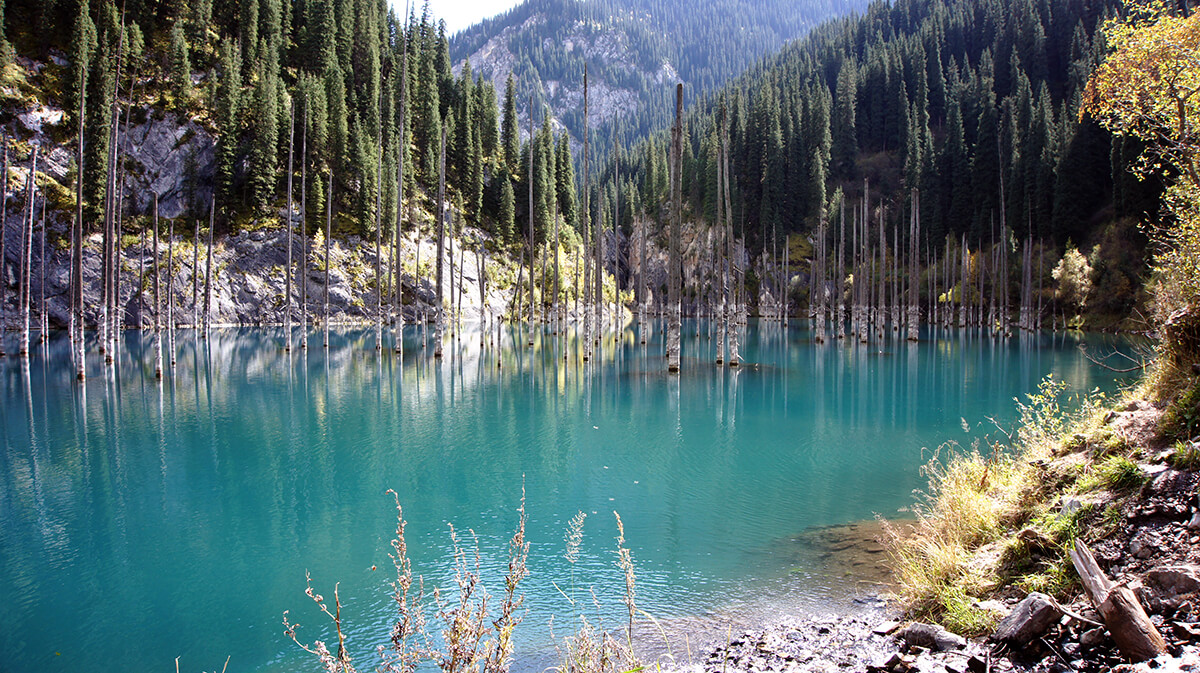 In the morning of the 4th day departure to Kolsay lakes. The first lake is located almost at the same height as Kaindy just above 1800 m. Walk along the first lake on the trail and photographed. At the request of tourists can organize trekking to the second lake, which is a 4-5 hours return to the car. 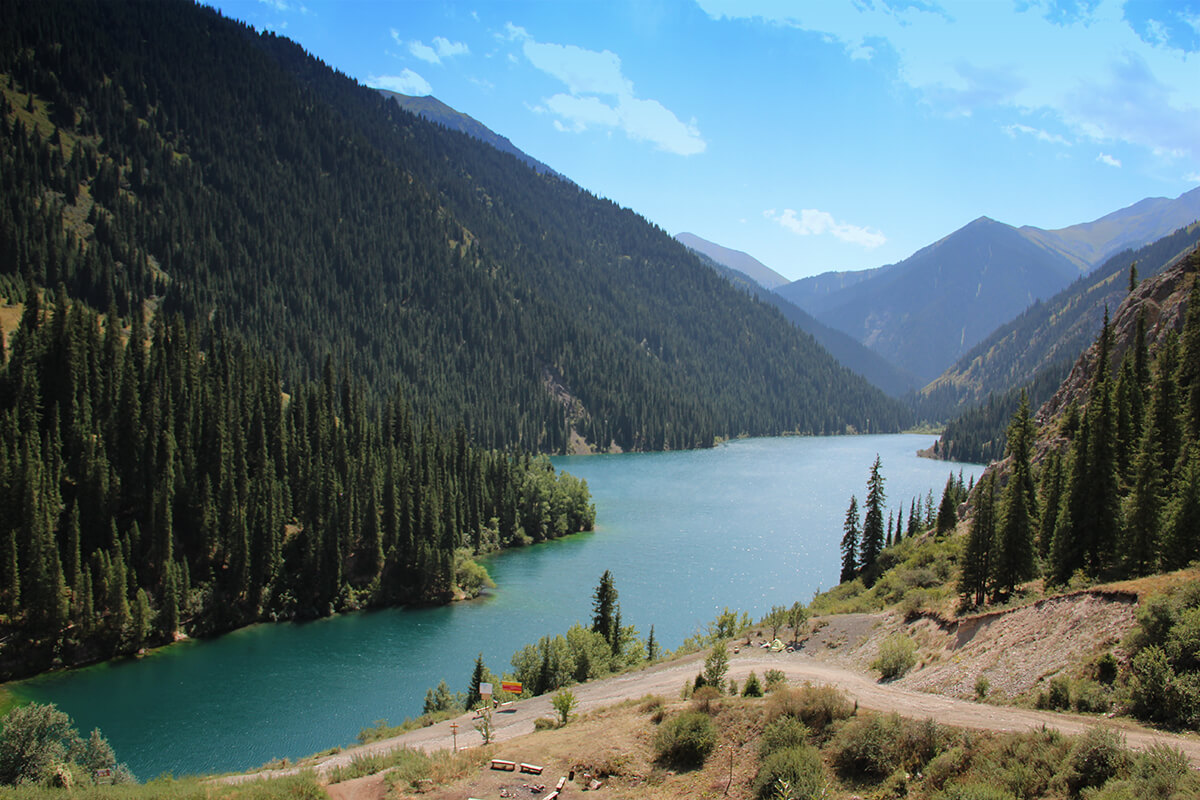 Leaving the mountain coolness of the Kolsay lakes to another creation of the Charyn National Park – Moon or Small canyon. It takes 2-2.5 hrs On the way stop at panoramic point overlooking the Charyn river band forest (forest that grows on the banks of rivers), and behind will be seen the edge of Moon canyon.

After 20 min. we enter into it. The road leads to the most interesting places yellow as the color of the moon, castles. The clay is here after the winter turns to dry powder, and sometimes its thickness can be significant. Perhaps because of this, it is called Moon. 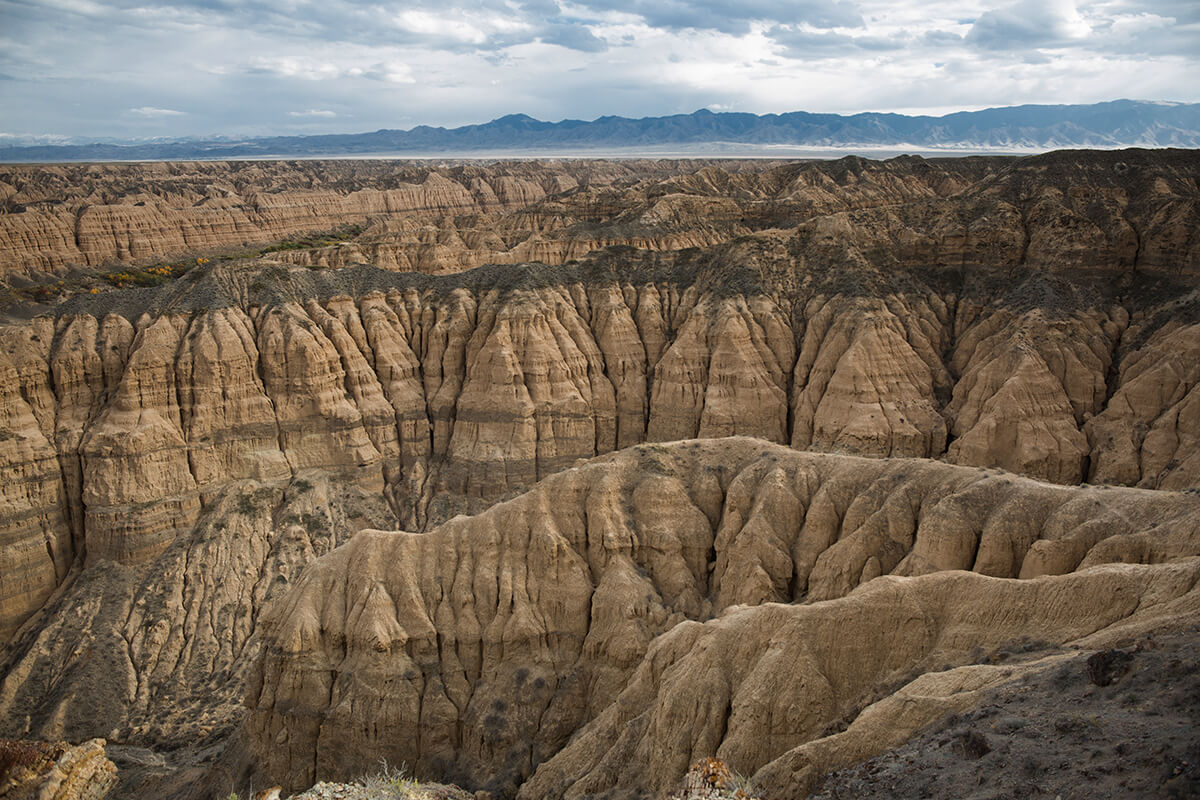 Go on the road again and headed to the mountains. Passing the village of Kegen and the eponymous river, which is one of the origins Charyn (a second significant source of the river Karkara). In the afternoon we arrive to an unusual inland lake Tuzkol (tuz – salt from Kazakh). The lake does not fall into no considerable river, whereby the salt content here, even higher than in the Red Sea. The shore muddy due to the black healing mud. Directly overhead can hang heavy storm clouds, on the horizon, lightning flashes. At first glance, the terrain inhospitable, but the lake is still very picturesque. At sunset and dawn it is possible to make gorgeous pictures of the lake, and if you see the Lord of the Sky – peak of Khan-Tengri peak (the highest peak of Kazakhstan 7010 m), the photo is just magical. Here the main thing not to oversleep the moment. Spend the night in the immediate vicinity of the lake on dry green lawn with a spring. Despite the lack of rivers and springs here very much. Still, it’s a mountainous area and at night even cool in summer. 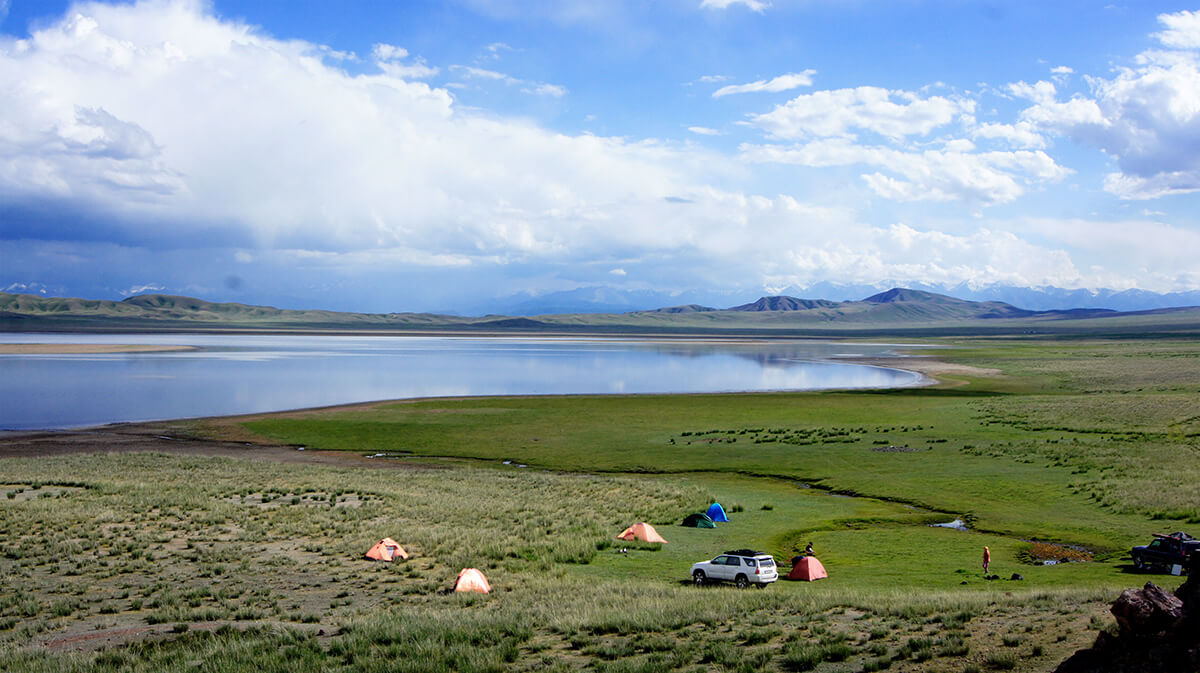 Chokan Valihanov spent the night in the vicinity of this place on the river Karkara. We got to the South ridge and mount Kushmurun (the end of the ridge Temirlik), near which is a mountain Manaschi-Bestobe. According to legend Manas Batyr (hero of the epos) was encamped during the war with jongar (East Kalmyks). In many rivers of this area the fish “chabak” or osman.

This day we cross the border of Kazakhstan and Kyrgyzstan. On the Kyrgyz side is folded in a stone mound on the Santash pass and counting the stone. According to legend, when Tamerlane went to a Chinese campaign in this place, ordered each of his soldiers to put on the stone. Return – to shift to another place. Not lifted the remaining stones he judged about their losses.

Going back to trace the route Valihanov along the Tyup rivers flowing into Issyk-Kul lake to the East. “Opened Issyk-Kul, the subject of our risk,” wrote Valihanov.

Do we finally arrived at this amazing sea of mountains. The road this day very heavy, highway of Tyup-Karkara not completed. We stop for lunch at a major centre in the East of the lake – Karakol. Which was formerly called Przhevalsk, in honor of Nikolai Mikhailovich Przhevalsky, the great Russian traveller and naturalist, who lived in the same years that Valihanov. He continued the study of the Tian Shan mountains and reached the Tibetan plateau. He died in Karakol.

After lunch we will visit the Zhetyoguz valley, where is the famous rock Seven Bulls and Broken Heart. Drive deep into the gorge and go to a short hike (1 hour) to the Girlish Braids waterfall. 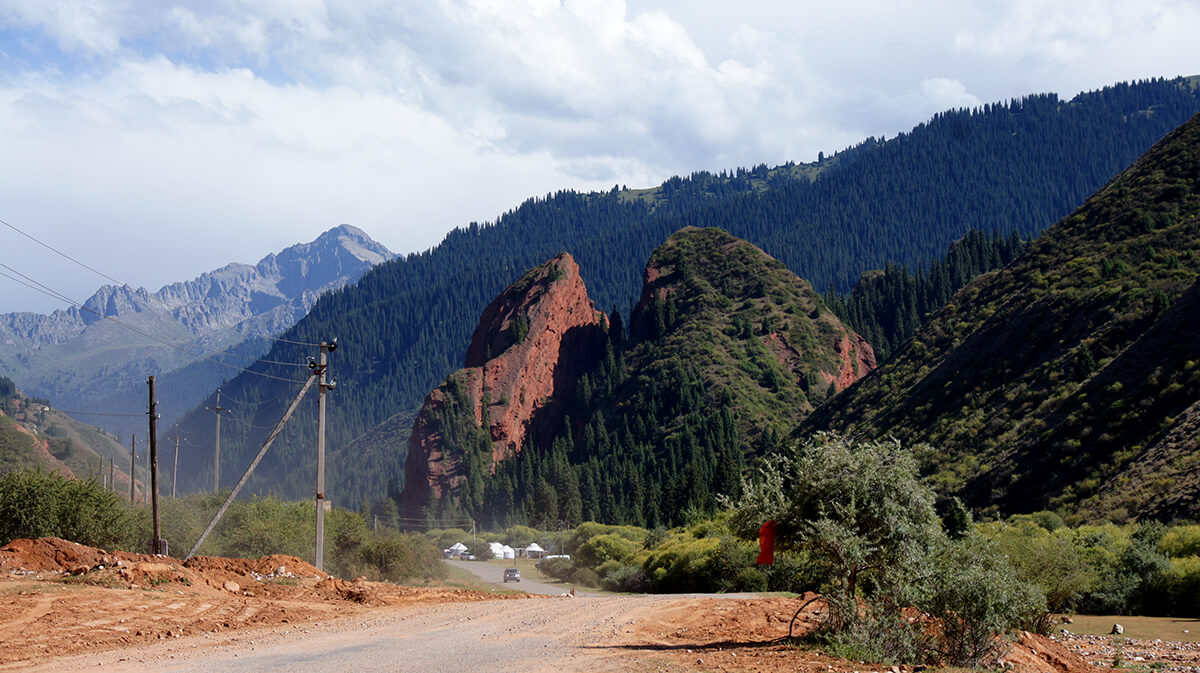 Return to Issyk-Kul lake and go to the beaches near the village of Tamga, where we spend the night on one of the sandy beaches. On the horizon stretches of the Issyk-Kul lake, and around the vast mountain range of the Tien Shan. Romance! It becomes clear why the mountains are so attracted scholars and travelers, and now tourists. 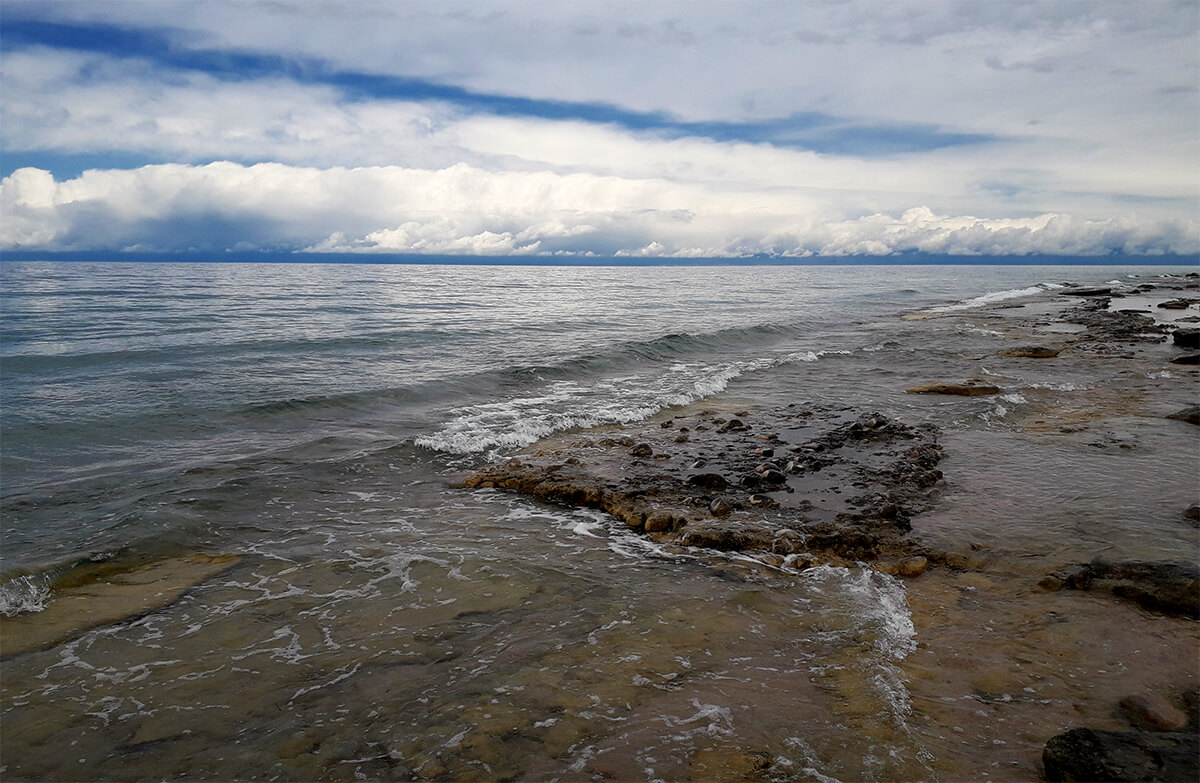 From the first day of Valihanov in lake Issyk-Kul, which he carefully researched and studied the life, culture, customs of Kyrgyz clans bug and sarybagysh feuding. Chokan has reconciled them. In July Valihanov went back through the pass Saty (the area of lake Kaindy), according to it, dangerous and difficult. “As a tourist I was looking for adventure,” he wrote in the diary. And again the upper Chilik, Zhalanash, Assy, Turgen, Talgar, and… June 15 – the strengthening of the Verniy (now Almaty). Lovely heart space. Chokan was the first person in the Tian-Shan, who used the word “tourist” in its modern sense.

Chokan will return to Issyk-Kul in his next expedition, which will head to Kashgar.

On this day we will visit one of the valley of Terskey Alatau – the Barskaun. It is known that here there is a road to the gold mine one of the glaciers on the mountain valleys. Syrt is a broad and flat area in the highlands of Tien Shan, which are covered with minimal vegetation. On the way to the valleys of visit the waterfall of Champagne. And after passing all the picturesque Barskaun valley will come to pass with the altitude of 3,800 m. Here we find ourselves in the direct vicinity of the glaciers. After the pass starts, the valleys and the plateau of Arabel with numerous lakes and snowy peaks over 4000 m. Weather permitting, we will try to visit next pass, the height of which 4021 m – Suek pass. Kirghiz it’s okay to build roads at this altitude. 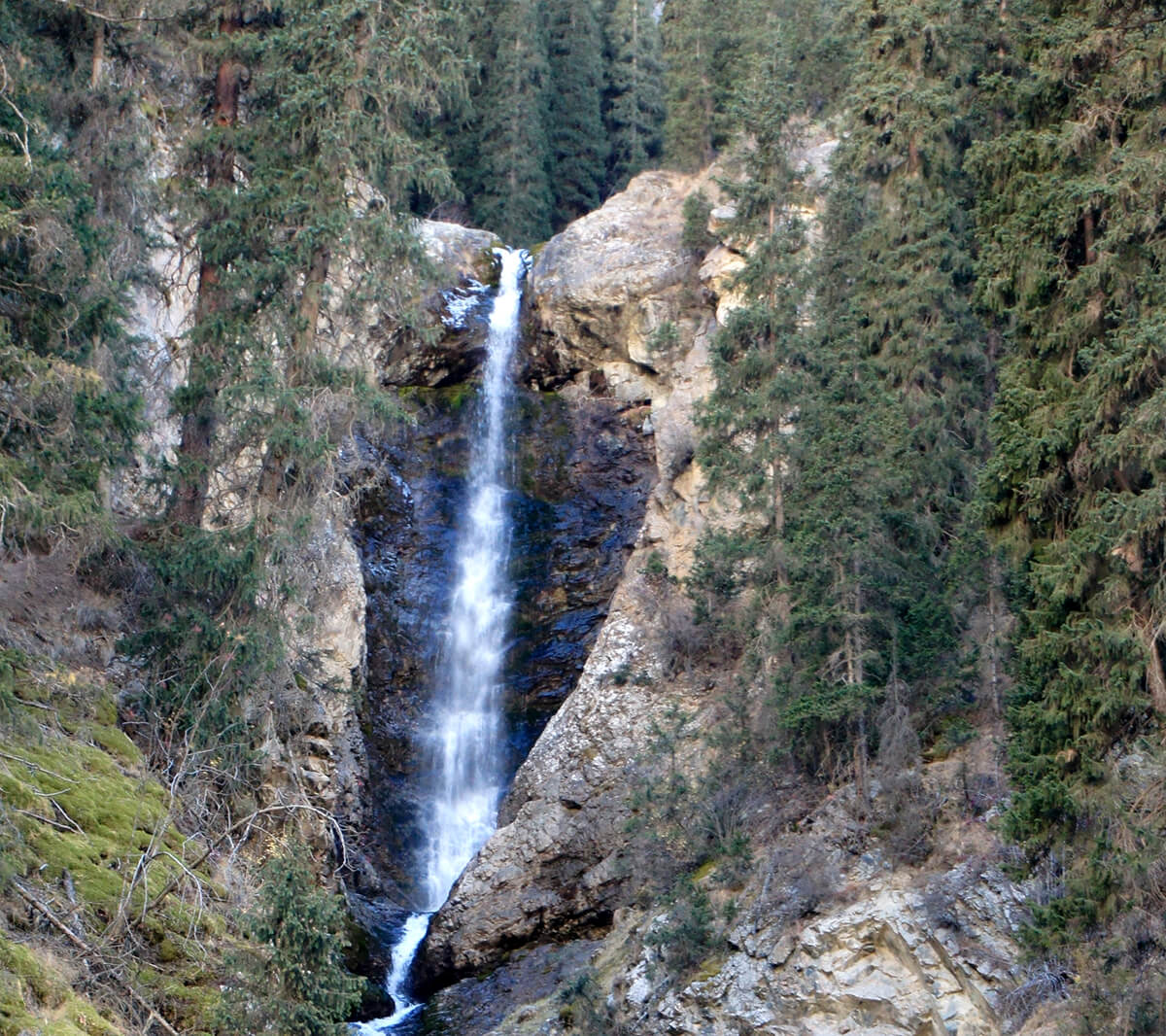 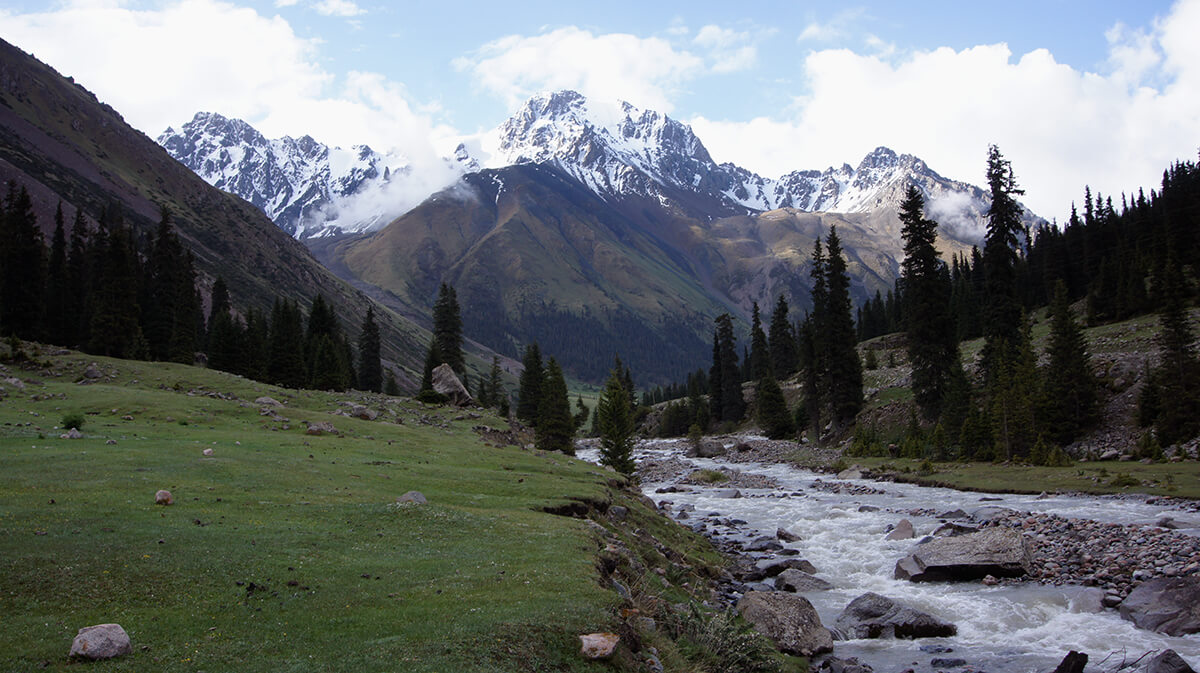 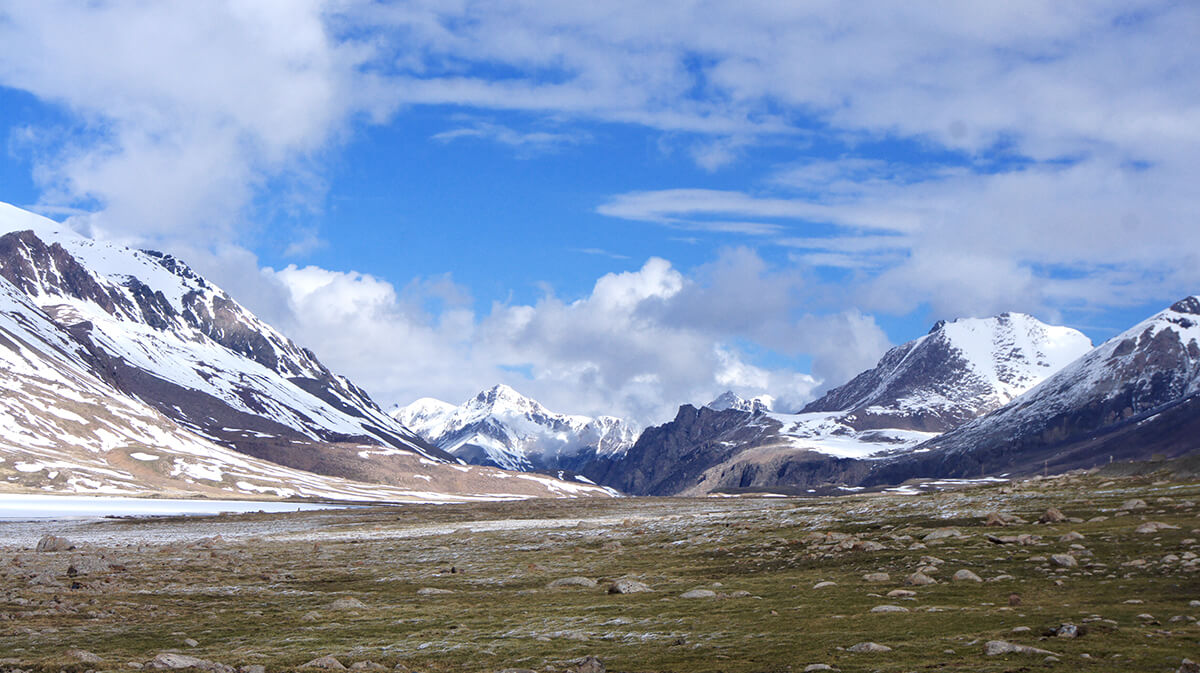 In his next expedition of Chokan Valihanov visited the Alpine valleys (syrt), passing through the neighboring gorge Juuku (Zauku). Here he spent about 12 days. He successfully reached the city of Kashgar (China) where he spent six months, and came back through back through the Fergana mountain range (Uzbekistan and Kyrgyzstan).

And we still have one day of adventure. Back to the beach in Tamga. After the Arctic cold plateau Arabel the water in the lake Issyk-Kul does not seem so cold. In the warmest month in July the water warms up in the best case up to +22 degrees.

Back in the city of Almaty. Stop on the way to the canyon Fairy Tale, reminiscent of their view the landscape of Altyn Emel and Charyn. Go to Karasu border near Korday. The road this day is about 8-9 hours 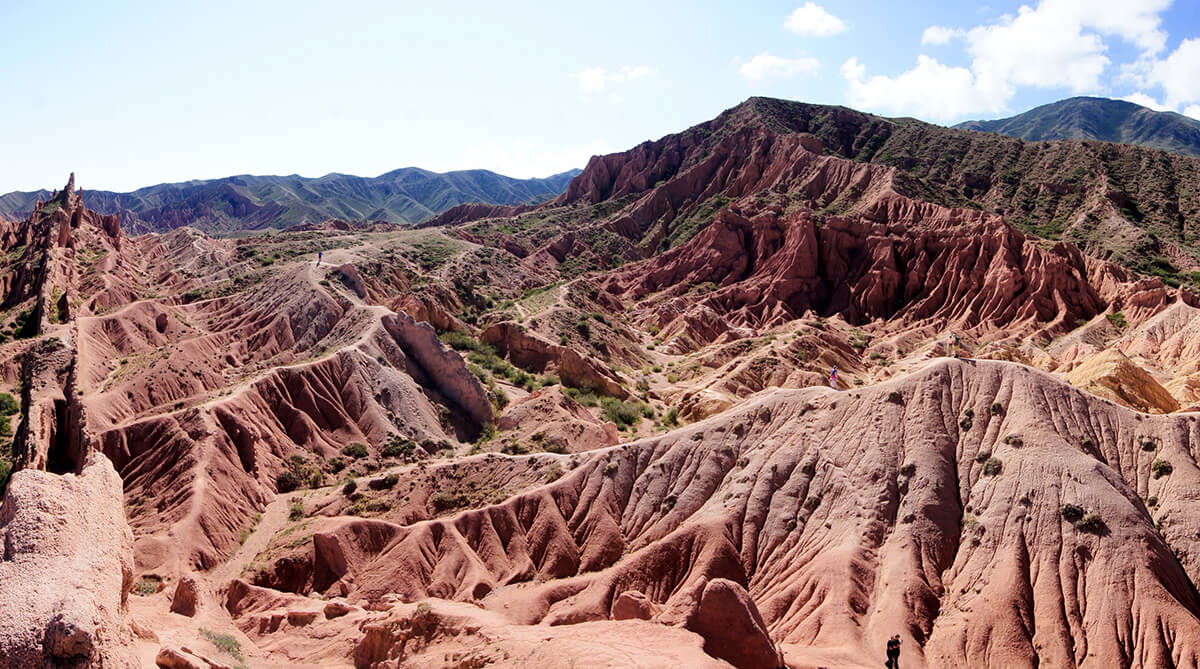 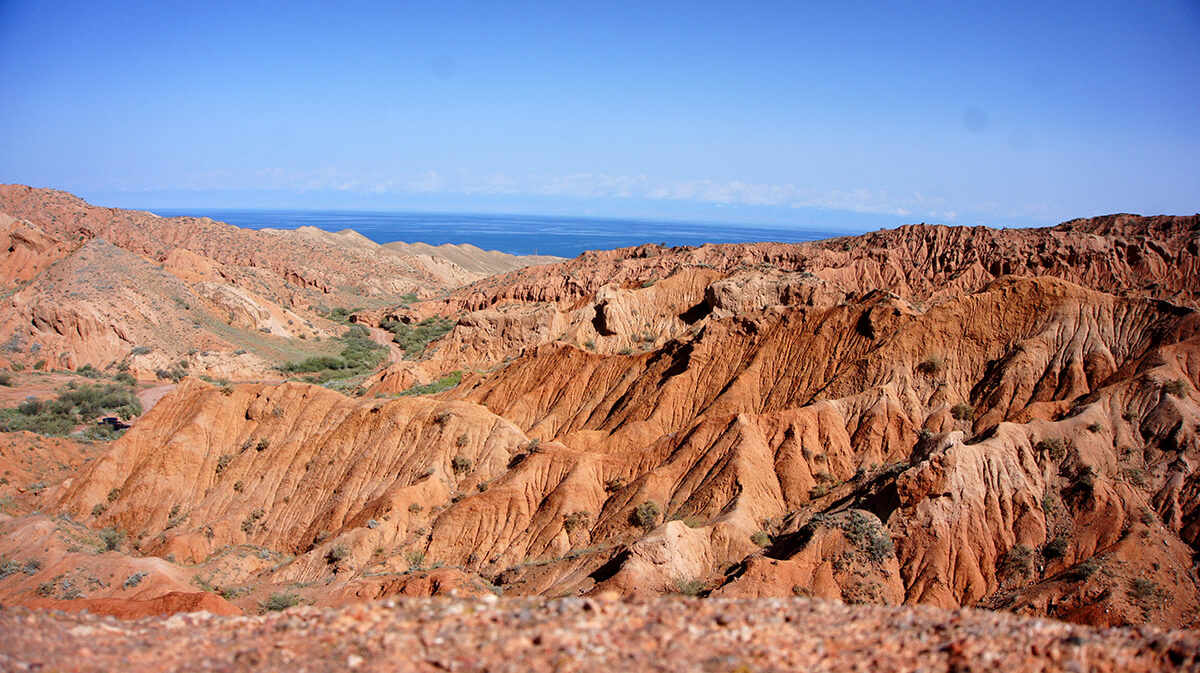 Price includes: Not include:

Every person need to take: